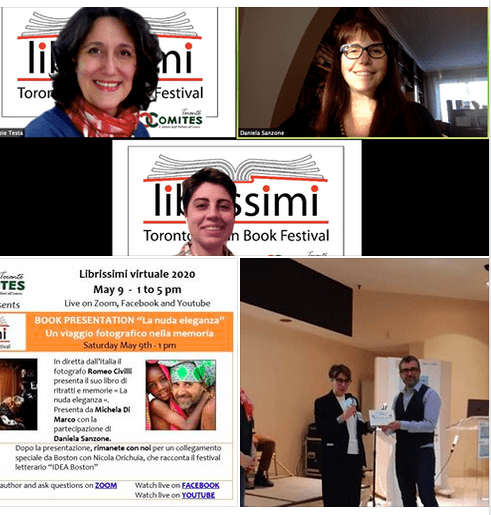 Librissimi Virtuale 2020, second panel. Four writers discussed their experiences as members of the LGBTQ+ Italian-Canadian community and the importance of writing and literature in their lives. Elena Basile, Christopher DiRaddo, Domenic Beneventi, moderated by Elio Iannacci and hosted by Licia Canton.

Librissimi Vurtuale 2020, third panel. Acclaimed novelist Nino Ricci author of the Lives of The Saints trilogy and numerous Award-winning novels in conversation with Happie Testa will explore his tormented characters and the expression of Italian Canadian identity. After the presentatio, a special live visit with the organizers of Fill – Festival of Italian Literature in London for an update on the festival in times of COVID.

Librissimi Virtuale 2020, fourth panel. THE TRANSACTION by Guglielmo D’Izzia
Guernica Editions, 2020
A property harbouring a gruesome secret goes up for sale. Two men–perhaps, the wrong men–are shot in plain daylight. Nothing is what it seems. And matters do not turn out as anticipated. De Angelis, an inscrutable northerner, is travelling to a small town perched somewhere in Sicily’s hinterland to negotiate a real estate transaction, only to find himself embroiled in a criminal conspiracy.
Guglielmo D’Izzia hails from Sicily. He’s an actor and a writer. His artistic pursuits have led him to some of the greatest cities in the world: Rome, New York, and eventually Toronto, where he now resides. The Transaction, his debut novel, won the 2016 Marina Nemat Award.
MODERATOR
Giuseppe Cafiso, nato a Toronto e vissuto in Italia e in Canada, si è laureato all’Università di Toronto in Storia e ha conseguito il Master in Italiano. Ha insegnato Storia, Diritto e Letteratura inglese per il Toronto Catholic District SchoolBoard, assumendo poi l’incarico di Vice-preside e Preside in diverse scuole. Attualmente è Direttore dell’ICFF Youth, festival annuale di cinema internazionale per ragazzi.

Librissimi Virtuale 2020, fifth panel. Longbridge Books, 2019
Where Angels Come to Earth, an evocation of the Italian piazza – Vincenzo Pietropaolo and Mark Frutkin.
A unique volume combining photographs by a highly respected documentary photographer and lyrical prose by an award-winning author. The presentation will offer a series of screens showing a selection of photos from the book by Pietropaolo. While these are on screen, Frutkin will read texts appropriate to each photo, offering a clear view of the book.
Mark Frutkin has published seventeen books of fiction, poetry and nonfiction, including The Rising Tide (Porcupine’s Quill, 2018). His novel, Fabrizio’s Return (Knopf), won the Trillium Award and the Sunburst Prize, and was shortlisted for the Commonwealth Prize. His novel, Atmospheres Apollinaire, was a finalist for the Governor General’s Award.
One of Canada’s pre-eminent documentary photographers, Vincenzo Pietropaolo is recognized internationally for his work on social justice issues. He has authored or co-authored twelve books of photographs, and his photography is a feature exhibition at the Canadian Museum for Human Rights. He was born in Calabria, Italy, and raised in Toronto, where he still lives.
MODERATOR
Domenic Cusmano is a journalist, communication professional and educator. He is founder and publisher of Longbridge Books, dedicated to the publication of works of fiction and non-fiction that promote cultural diversity. He is also a co-founder of Accenti Magazine. He is currently working on a short story collection.

Florence and Fashion: Gucci, Ferragamo, Pucci and the Birth of Italian Moda